First post with the WordPress app for iPhone. Seems generally usable but basic.

Could do with a couple of tweaks as I deleted my first attempt because I could swear the UI wasn’t showing me the Save button! The ability to add a photo would be a good thing but that could have something to do with the way apps are built i.e the WordPress app probably can’t directly interact with the photo app.

Edit- I’m blind. You can upload photos. My mistake. Here is one of my neighbour AKA “Phlegm man” 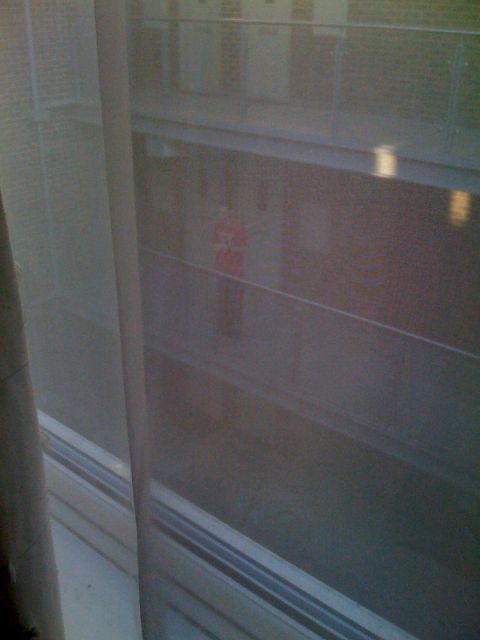 Patronizing the musical arts with an iPod Touch

Went down to the Gardeners Arms on Thursday night to patronize the arts. The acts playing at this low-key, semi-acoustic musical evening in the back room were Ben, Stornoway and Jont Whittington (the custodian of the whole Unlit acoustic evening). What happens is Jont roams around, putting on shows in the living rooms (or in the this case, the back room of a pub) of people who sign up on the Web. Read about it at the BBC Radio 2 site.

I had my mobile phone and my iPod Touch at the ready. You can see one a couple of the photos I took in this post. During the performances, as I sat on the bar billiards table a the side of the room, I made some notes using the new Notes application for the Touch.

I admit, I was a little peeved to have to pay £12.99 to download Apple’s January update…but I gotta say the notes app is very good. When I got home, I emailed the note to myself and you can see the results here:

Jon T. Slightly earnest but still not bad really.
Ben is Folds-esque sometimes. The Dressing Up song is fun. So is the
Living Legend one. Self aware.

The new Stornoway stuff sounds good. Actually, I can’t even begin to
put into words how good I think they are in general.

The Jont Peace song is a bit Manu Chao in its cadence at the start. His CD is
called Supernatural. Also reminds me of Jason Anderson at Freuds a
while back…complete with audience participation.

Sent from my iPod Touch

I’m getting pretty good at typing with the Touch’s keyboard.

I never wanted an iPod before the Touch came out. It is living up to its promise. Music is ironically one of the things I use the least…wifi rocks, multitouch rocks, Safari is nice, video on boring train journeys a boon. Mail looks promising…Contacts and iCal are pretty good too. I could live without the Weather and Youtube apps…as for the Stocks app…meh.

I really am becoming quite Mac-ified these days…my Touch and my Macbook at home and also a newly acquired Macbook at work as well. Back in the OS 7-9 days, I used Macs quite a bit at university on the newspaper and also the defunct fanzine that I helped to run. Later, I used a Mac with my left hand and a Windows machine with my right for (differing) work purposes but had a bit of a hiatus from Mac computing for several years, since leaving Australia.

Anyhow, musn’t forget to get a ticket for Stornoway’s next gig at the Jacqueline du Pre Music Room on the 26th with the rather good The Epstein , North Sea Radio Orchestra and Stuti Mehta.

Spotted this on an Apple blog yesterday…I liked it.

PC vs Mac humour, Japanese animation references, Star Wars, C64, a catchy song performed by an OS file management system, this has it all.

At the Apple Store in NYC

HI FOLKS. I’m at the Apple store on 5th Avenue in New York…contemplating bagging myself a MacBook. I borrowed the photo from here: …will add my own soon.

This work is licensed under a Creative Commons Attribution-NonCommercial-ShareAlike 3.0 Australia License.